NEW DOWNLOAD NOW AVAILABLE, ON SALE THROUGH NOVEMBER 2nd ONLY! 30% OFF!

* Includes the first Sūrya Namaskāra Sequence ever revealed from an Ancient Source  Source Text – the Kriyāsāra of Nīlakaṇṭha, sage of the Vīraśaiva lineage of Maharashtra (ca. 14th century)

* Reveals how Sūrya Namaskāra,  once a core daily practice of Tantric Haṭha Yoga, was removed in the ‘Haṭha (Yoga) Pradīpikā,  erroneously called  the ‘Bible’ on Haṭha Yoga

What Students will receive in this class – Get in on the Cutting Edge!

Part I. the Haṭhapradīpikā and the loss of Sūrya Namaskāra in Daily Yoga practice.

In this introductory session, I show how the Hathapradipika (1.61), wrongly assumed to be the ‘Bible on Hatha Yoga,’ distorted a single stock Tantric verse in order to eliminate Postural Yoga and Sūrya Namaskāra practice from Haṭha Yoga. We will explore the original verse, appearing in Tantras dating to before the 12th century, and learn how it opens a doorway to the incredible richness of hundreds of Vinyāsa-based Yoga practices in the source Tantras, since obscured by a lack of focus in scholarship on the true source of our modern Yogic heritage.

Part II. * The first Sūrya Namaskāra Sequence ever revealed from an Ancient Source.

In his Kriyāsāra, the ‘Essence of [Physical] Ritual,’  Nīlakaṇṭha,  a ca. 14th century sage of the Vīraśaiva (‘Warriors of Shiva’) lineage, who details a 12 pose Sūrya Namaskāra Yoga practice which was taught in Tantras belonging to his lineage, dating to ca. 1000 A.D.  This postural practice has come down to us today as the ‘Classic’ Sūrya Namaskāra sequence (vinyāsa). This is the same sequence commemorated by the Indian govt. in a stamp series on the International Day of Yoga in 2016. 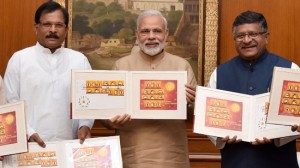 * In this groundbreaking class, Chris takes us through an exciting comparison between each of the poses as described by Nīlakaṇṭha and those featured in the 2016 Stamp series, showing them to be identical.  We will discover that the  Solar ‘Seed’ Mantras leading the sequence (hrāṃ, hrīṃ, hrūṃ, etc.) — preserved in the 20th century teachings of T. Krishnamacharya and the Bihar school – have remained un-changed for over 700 Years. The evidence provided in this class proves once and for all the  ancient antiquity of  Sūrya Namaskāra as a physical Yoga practice.

‘Yogavidhi’ is my New Online Series  revealing the roots of the Vinyasa-Based Postural Hatha Yoga Tradition, based on my Nine-Year Exploration of the roots of Hatha Yoga, as it evolved in the Tantric traditions.

Yogavidhi is a Sanskrit phrase which means the ‘Ritual Sequence of Yoga.’ This is the name given in the Tantras for a single daily Yoga ritual present in hundreds of Tantras spanning over 1,000 years (ca. 500-1500 AD).  This series will show that it is from this ritual that  all modern Asana-based systems of ‘Vinyasa Yoga’ derive.

In this series, we will go through the doorway into our own Yogic heritage, and discover the incredible ‘Ritual Sequences of (Tantric) Yoga’,  including —