Notes on Each Chakra

* The ‘place after twelve’ is a common name for the very  crown of the head where the Sahasrara lotus is located (Chakra #11) meaning twelve finger-breadths above the third eye.

By ‘Ṃ’ or the ‘bee’ is meant the final vowel sound  of “nnnnnggg” that pronounced correctly breaks through the 3rd eye granthi  as  carries any given seed (bīja) mantra  through the crown in ucchāra practice. The 1,000 petaled lotus is thus known as the bee’s favorite resort, where it coils up drunk on the highest nectar of Shiva Consciousness in this floral schematic of the subtle body.

Thus Shakti at this level is called the ‘Root’ Māyā because it is from the crown of the head that the subtle in-breath which will power vocalization (via the out-breath) is first experienced. Hence the crown is the root place of this Primal Shakti, also known as ‘Ādhāra-śakti’ or as Kuṇḍalinī-śakti, coiled  at the place of the ‘bee’ from whence she first descends. This character, the sound of pure resonance, is called the ‘bindu’ (Ṃ), and is represented as simply the DOT or ‘seed’ point that contains the universe in the shape of a coiled up serpent (kuṇḍalinī śakti) above the crown of the head.

This ‘Root’ foundation (ādhāra) of the subtle breath (at the crown) is then mirrored at the base of the body in the chakra known as mūlādhāra, where the word ‘foundation’ (ādhāra) now refers to the root (mūla-)  of the body. 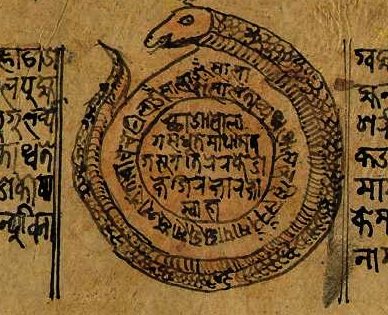 The ‘new moon’ refers to the first phase of in-breath from the ‘new moon’ (amāvasyā) phase marking the highest transition (saṃkrānti) of out-breath back to the in-breath at the crown of the head. The character ‘SA’ associated with the descending in-breath parallels ‘HA,’ the character for the out-breath; hence, at the 2 saṃkrānti points between the two lateral breaths (navel or crown), the two characters form HA + Ṃ + HAṂSA or SO’HAṂ (‘I AM THIS’)  meaning that the seed point of Kuṇḍalinī appears. This is what our text is referencing when it mentions the ‘mantra AHAṂ’). When HAṂSA (‘swan’) is manifested at the the navel saṃkrānti, during kumbhaka, this references the sonic ascent (ucchāra) of  kuṇḍalinī (powering any mantra) in the form of liberating fire that breaks the grantihis.
CT’s notes for Chakra #10-

Notes: the vehicle is  the ‘wish-fulfilling cow’ of Vedic Lore; The emphasis on the embodiment of time at this forehead center suggests the locus that is now beyond time, that is to say, now beyond or above the trajectory of the breath, which symbolizes the flow of time.  The active śakti is prāṇa-based and carries one’s awareness to the timeless realm of śiva consciousness at the crown, which transcends time (kālottara). Here at the forehead center, great siddhis (represented by the kāma-dhenu, the ‘wish fullfiling cow’ below)  are won as the yogin’s awareness becomes free from the grip of time, that is to say of the mind. 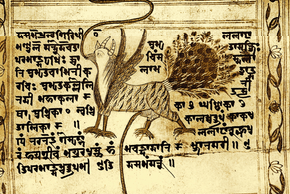