– The Place of Namaskāra in the Daily Ritual of Tantric Yoga – 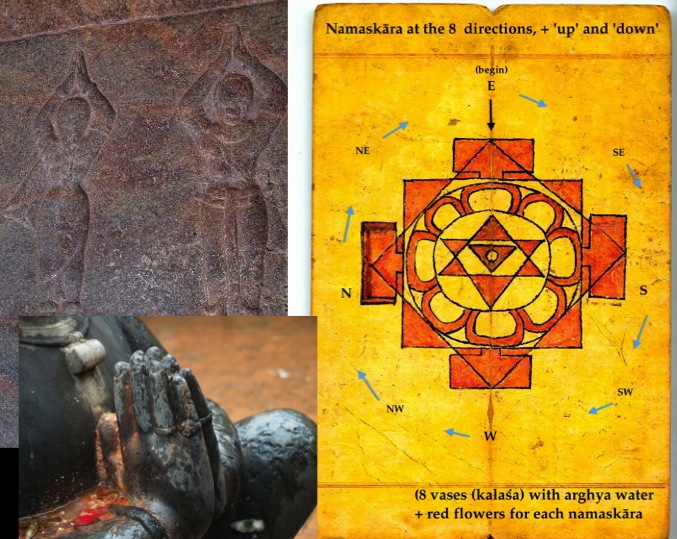 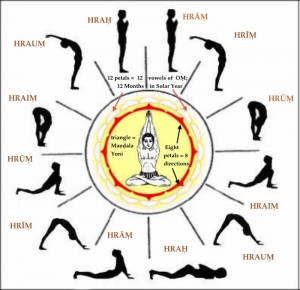 “As the Yogī performs the devotional sequence of circling around their  mūrti (altar space), s/he becomes one with Shiva….while engaging the Namaskāra kāraṇas (postures), led by the sun mantras, towards the ground and back up to standing, one become delighted with the light emanating from within, until the full glory of what it means to make contact (saṃyoga) with that divine light fully is revealed…”

~ Perfect for Yoga Students and Teachers wishing to stay on the cutting edge with their practice and teaching, as Christopher’s reveals the Origins of Haṭha Yoga from source texts! ~

In these Sessions, Christopher introduces the forgotten role of  Sūrya Namaskāra (‘Sun Prostrations’) from un-published  source Tantras, a practice once central to Haṭha Yoga practice but left out of the few texts which have come down to us. As a result, Sūrya Namaskāra is mistakenly thought to have been invented by Krishnamacharya and his students of the Mysore school in the early 20th century.

Students will learn how Sūrya Namaskāra was once central to daily Haṭha Yoga ritual,  and how it was engaged in a specific twelve-part postural sequence (krama-vinyāsa)  at each of the 8 directions, while circling around one’s practice Mandala (Self-consecrated practice space) in the beautiful rite known as Pradakshina (sacred ‘circumambulation’).

Additionally, we will explore how the Pradakṣina-Namaskāra practice was originally inspired by the Indian dance tradition, and included spontaneous dancing, singing, and reciting poetry meant to empower one’s connection to the divine source.

Session 1.  The Dance of Namaskāra

How the Pashupata Lineage transformed Yoga into a Life-Affirming Practice

Within a century or so of the Yogasūtra‘s composition, an avant-guarde religious group rose to the forefront of radical Indian radical, Known as the Pāsupatas, these quasi-ascetics lived on the margins of society  where they worshiped  Rudra (‘Howler’), the archaic namesake of Shiva. Yet ironically it was the Pashupatas who first took Yoga in a new direction by integrating the framework for practice established in  Yogasūtra, with  movement practices adopted from the Nātya-śāstra, the ancient ‘Treatise on Dance.’ In this session, we will learn how the Pashupata Yogīs transformed ‘Namaskara’  from a simple daily ritual  of reciting  Gāyatrī Mantras to the Sun  into the dynamic movement practice known throughout the modern world.

The Place of Daily Namaskāra Practice in Early Tantric Yoga 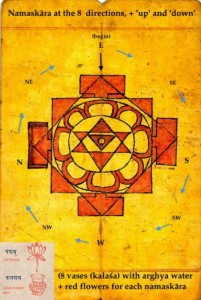 “Having encircled one’s mandala from within, the yogin is to perform the practice of sūrya namaskara prostration, culminating with a seated position, facing east…”

In this Session, we discover the preliminary practices of creating a maṇḍala, or sacred space for one’s daily Yoga practice, which served as a preparatory ritual to engaging in the rite of Pradakṣiṇa-Namaskāra. The maṇḍala was central to this rite, and served as the central ‘Axis’, or power center, of one’s consecrated practice space, around which the Namaskāra sequence of poses was performed at each of the 8 directions.

“You are every [inflection of my] voice [as I recite this] devotional hymn throughout [my] circumambulation [around the Axis of the Maṇḍala]. As I engage the sequential activity of this Ritual, it is You, O Śambhu, who perform each and every act, and its unbroken continuity; for I experience this devotional ritual entirely within You. O Śambhu …You are My Self.”

Drawing from ancient Tantric passages, in this session Christopher unveils the core preparation ‘rites’ once at the core of  daily Yoga  and particular to the  practice of Sūrya Namaskāra. This class culminates with the foundational poses of the twelve-part sequence known today as ‘Classic Sūrya Namaskāra.’