This rich, multi-part series is best offered over 2-3 sessions, but can be tailored for each audience. This series features Christopher’s latest translations and insights into the history of the Trantric tradition.

I.      A Visual Introduction to the History and Evolution of the Tantric Tradition

II.    The Lotus of the Heart: Revelations of the Early Tantric Subtle Body

III.   Experiencing the Resonance of the Divine Self: the Lost Practices of Tantric Yoga

IV.   Meditations on Sensual Experience: The ‘Flowering Forth of One’s Own Enlightenment’ by 10th century Sage Hraswanatha

Presentations: include visualizations of rare Tantric deities and sacred symbols for meditation

The following is a short, sample list of classes and workshops currently being offered by Christopher. Workshops can be tailored to the needs of individual teachers/yoga schools. Please contact us with any topical requests.

This class provides a 3000 year overview of the development of Yoga throughout the earliest (Vedic) period (1500-500 b.c.e.) of Indian religious history concluding with the advent of Hatha Yoga in the medieval period (1200-1900 c.e.). We will explore how and why Yoga became the central means to spiritual liberation throughout the religions of the Indian sub-continent.

Sanskrit is the language of Yoga, words of power subtly attuned to the unseen harmonies of the matrix of creation. It is a living heritage of great rishis, the enlightened ones, who walked the earth thousands of years ago and taught the path of Yoga. It presents us with a compelling responsibility and a lifelong challenge, while it inspires us to remain fully engaged in exploring what’s possible for a human being. Learning Sanskrit is an opportunity to know directly for ourselves what ancient Yoga practitioners discovered long ago. This class will introduce the Sanskrit alphabet and serve as a guide to basic pronunciation of āsanas and terms that are key to Yoga philosophy and practice.

Origins of Yoga: The Upanishads

The Upanishads (“To sit close in”) date from 800 b.c.e. to 200 c.e. represent the first major philosophical development of Vedic Hinduism. The Upanishadic Sages initiated what was to become a revolution of spiritual practice–the internalization of the Vedic sacrifice in the form of intense contemplation and meditation on the unity of the soul (Atman) with the omnipresent ground of all existence (Brahman). Inner worship and spiritual practice—known as ‘Yoga’, (‘to connect or discipline oneself’)–gradually developed as the chief means of obtaining transcendental knowledge. This class will focus on the evolution of the limbs of Yoga (later to be catalogued in the Yoga Sūtra) as found in the Upanishads.

The Three Yogas of the Bhagavad Gītā

The Bhagavad Gītā is considered by most Hindus to be the single most representative sacred text of the Hindu faith, and it is the acknowledged source book of Yoga philosophy. The Gītā is set within the great Hindu epic of the Mahābhārata. It is the story of Arjuna, a warrior prince, and his mentor and friend Krishna, who is really the reincarnation of the God Vishnu.

Just before the commencement of the great battle of Kurukshetra, Krishna, a personification of God, counsels Arjuna on the nature of the Self (soul) and its implicit union with the divine source of the universe. Krishna teaches that, although the body is destructible, the soul is immortal. In order to fully identify with our own immortal and omniscient nature, we must practice Yoga. He expounds upon three specific yogas that must be practiced: that of action (karma), and knowledge (jñāna), and devotion (bhakti).

“When the mind comes to rest, restrained by the practice of yoga, and when beholding the Self, by the self, he is content in the Self.”

“He who finds his happiness within, his delight within, and his light within, this yogi attains the bliss of Brahman, becoming Brahman.”

For several millenia, yoga adepts have described the moment of spiritual liberation to occur when the Soul (Purusha), forever whole and content, is discriminated from the constantly fluctuating states of mind that we experience in our daily lives. Sage Patañjali, the author of the Yoga Sūtra (2nd-4th centuries C.E.), the classical work of Rājā Yoga, explicitly teaches us how the illusory nature of mind-activity keeps us from experiencing our true Being, which is usually obscured by the constant whirling of the mind (citta-vritti).

The Essence of Tantric Śaivism 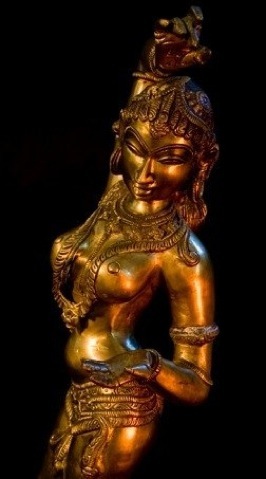 The Kashmiri School of Spanda: The Universe as a ‘Vibration’ of Pulsating Consciousness

The Divine Vision of Abhinavagupta: The ‘Skillful Means” (Upāya) to Enlightenment

An Introduction to Tantric Yoga

The Realms (Tattvas) of Shiva’s Universal Being

The Heart of Recognition, by Kṣemarāja

The Heart of the Yoginī (Yoginī Hridayam): An Introduction to Tantric Śāktism (i.e., to the Experience of the Divine Feminine)

Tantric Hymns of Enlightenment:  “The Flowering of One’s Own Enlightenment” (Svabodhodāyamañjarī) by Krama (Kaśmiri) master Hrasvanātha